Picasso, a Tablecloth, and a Probate Valuation Problem

This is from a friend who was an attorney who once did a fair amount of estate planning in the late ‘90s in the Greater New York City area. Stick around for the punchline:

“I had a client who owned brownstones in Manhattan and apartment complexes in Brooklyn and Queens.

Neat guy – French aristocracy, big in Big Oil in the ‘50s and early ‘60s, he started buying New York real estate in the Mayor Lindsey era when it was considered insane to do so.

I always met him at either his office in a brownstone off Madison Avenue or at his club on Fifth. Great guy, very laidback, lots of stories about France, art, history, Manhattan in the ‘70s. Not the most forthcoming of clients, it took forever to get all his info – business and personal – but it was a hardly onerous to be doing it over lunch overlooking Central Park.

But, finally, we got it done, produced documents for him, his wife, the business, the works. It promised to be a long signing, the client decided that we should do it over a meal in his home on Park Avenue. 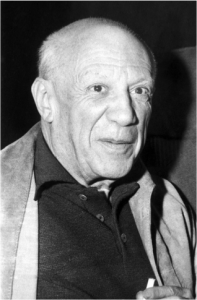 I was thrilled with the idea – after all, I had seen the current appraisal for his two floor co-op in a landmark building and the Louis XVI furniture inside. We’re talking Louis XVI furniture that had a pretty good chance that Louis himself had actually at least walked by at some time before the storming of the Bastille. The real deal.

I walked in and was blown away – it was like walking into Versailles. After the initial ‘WOW’ moment I settled down and started to recognize pieces and artwork from the appraisals.

He had brunch laid out – every meeting with him always revolved around food – we piled up plates, sat down, he and his wife on a couch I was nervous eating within ten feet of, the rest of the family scattered around an ornate, sparkling, three-foot-high coffee table that Napoleon had probably snacked on.

It was all nice and relaxed and so very civilized. We talked, as always, about history and politics and whatever, somewhere along the line the framed drawing hanging over the couch caught my eye, then grabbed it. It was … interesting, the signature, well, I had to ask.

A Gallic shrug and, “I suppose so.”

“Well,” he started, then launched into this: he worked in the Cote D-Azur in the late Fifties. He always woke early, went to the same café for breakfast every morning without fail. The same crowd was there every day, everyone kept pretty much to themselves. One of the regulars was an older, somewhat familiar, balding man.

One morning, the man approached Jean, told him he had forgotten his wallet and could he ‘impose’ on Jean and pay him back the next day. Jean, as I can attest, was nothing if not generous with food, and he invited him to sit with him.

The talk was amazing, breakfast melded into lunch, then dinner, wine flowed. Late in the afternoon, Jean’s new friend said, “I had such a great time, I must pay for this.” Before Jean could object the man pulled pens out of his pockets, had the table cleared and a new, linen tablecloth brought over and proceeded to – with Jean now in awe – sketch out a drawing. Then he signed it.

“Great story” everyone but me gasped.

I caught Jean’s eye, he must have seen the utter resignation in them for he said, “Does this effect what you’ve been doing? I am sorry I forgot all about my Picasso.”

“That’s okay, Jean,” I answered, “I forget about mine all the time.”

He had the grace to laugh, “But does it? Alter what you’ve done?”

“Depends on the valuation.”

“Oh, I’ve never had it appraised.”

I left my tongue firmly in cheek but started to put the pile of documents back in my briefcase, “Well, let’s get it to Sotheby’s and see what happens, maybe we’ll get lucky and you just ran into a Picasso imitator and all you got out of the day was a nice drawing.”

He laughed, I called a friend at Sotheby’s, went back to my office and waited. Two weeks later I ended up shredding the documents. The drawing was worth more than one of his Manhattan brownstones.

It’s a neat story, and it brings up a big point about the estate planning process that usually occurs long before we at Georgia Probate Law Group end up seeing it in Probate Court. Estate planning is only as effective as most clients allow it to be. This Picasso is missed if our friend wasn’t invited to the co-op. We can only imagine the frenzy this would have caused in a probate setting.

Related Topic:  So, You're an Executor
MORE FROM OUR BLOG
What is Ancillary Probate? May 10, 22